We Reached the Summit of Mount Everest!

Home / Health & Wellbeing / We Reached the Summit of Mount Everest! 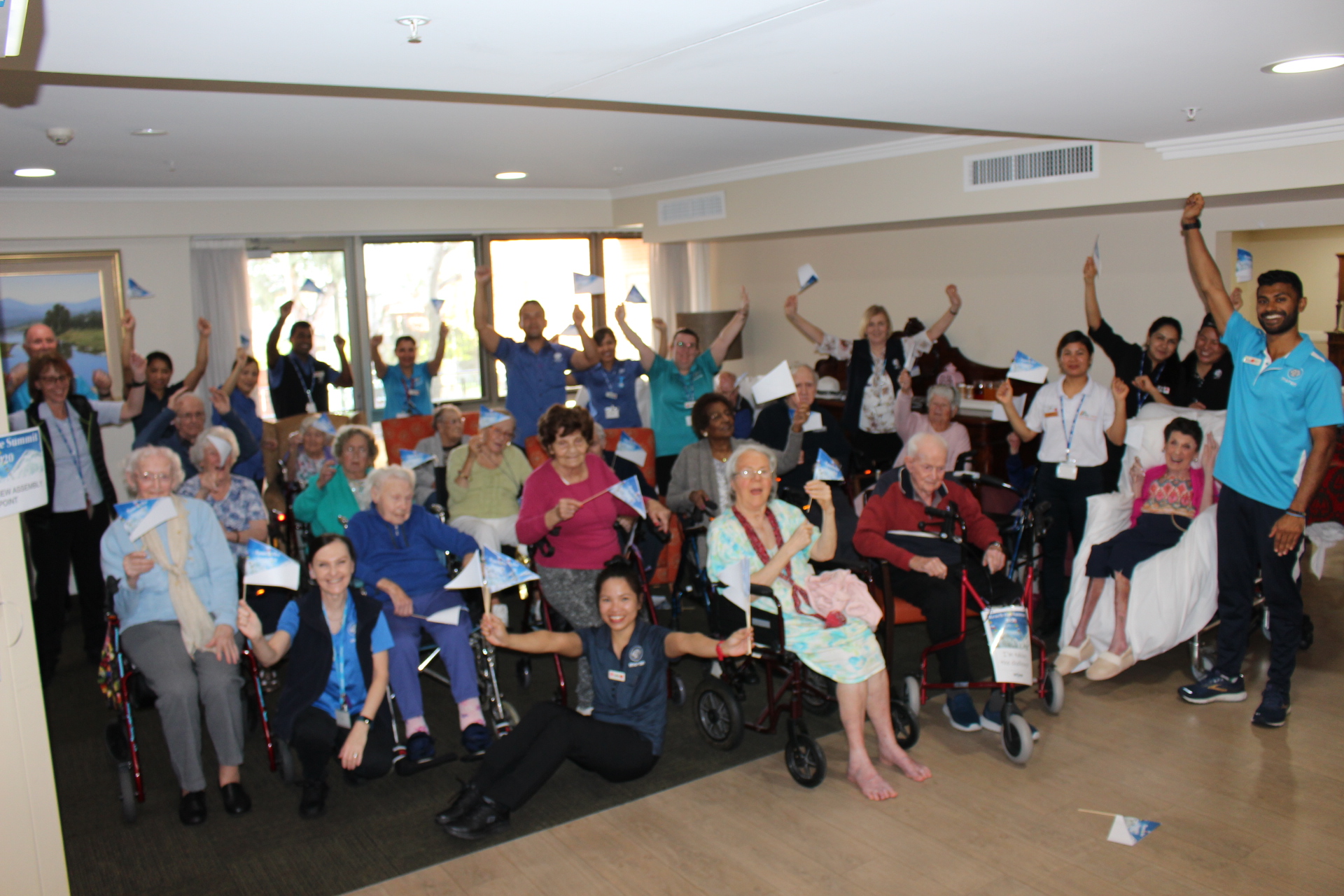 In May 2020 after almost three months of COVID-19 visitor restrictions and social distancing within our home, the team at Moran Sylvania decided that residents needed a boost to their mental, physical and emotional wellbeing.  What started as a seed of an idea from the teams providing wellness programs to residents (clinical, physio and lifestyle) quickly gained impetus and morphed into something extraordinary, the Moran Sylvania Reach the Summit Challenge was born.

The challenge was very simple – we would improve resident wellbeing by inviting residents to participate in a walking challenge.  To make things interesting the goal would be to individually or as a group walk the 8850m from Kathmandu to the Summit of Mount Everest during the months of June and July 2020.

Our onsite physiotherapists became Sherpa Dhan, Sherpa Ben and Sherpa Vee, and their job was to lead the Reach the Summit Challenge Walk on Tuesdays and Thursday at 11.30am, with residents meeting 15 minutes early to participate in warm up exercises and have a quick chat about the walking strategy  followed by a warm down and then lunch.

Said General Manager Lorraine Kelly – “we hoped this challenge would inspire our residents no matter what their ability and that everyone could participate in some way, but we did not imagine for one minute the results, teamwork and fun we would have along the way.

Once the Marketing team heard about what we were planning they got creative and we were in business.  Team members and residents even got crafty making Reach the Summit flags and bunting!   Maintenance team members measured the distances in the hallways and corridors and put up distance posters so that residents knew how far they were walking and could independently jot down their individual distances if they wanted to.”

A chance conversation with the Manager at Kathmandu Cronulla put the Moran Sylvania team in touch with the Australian Himalayan Foundation (AHF) who were instantly captivated by the idea, seeing similarities between the Moran Sylvania Challenge and the Kathmandu Sponsored Neverest Challenge an annual event run by the Australian Himalayan Foundation.

They agreed to partner our Reach the Summit Challenge by loaning and donating Nepali posters, prayer flags, distance posters, banners and all manner of colourful decorations to help theme the event.

Moran Sylvania residents were quick to embrace the challenge – some residents became endurance walkers, pushing themselves to the limit – like 99-year-old Dorothy Brandley who didn’t miss a single warm up, walk or warm down.  Said Dorothy – “I don’t like to sleep during the day…I don’t want to miss out on anything! You’ve got just keep your body moving every day, I don’t like to sit around!”

Moran Sylvania has a number of Nepali team members who expressed how much it meant to them to see their country featured as part of an important activity and share some of their culture with residents.   This interest saw our chefs preparing Nepali dishes for residents and team members to taste including Momo’s (Nepalese meat dumplings), Nepali Curry, Khir (Nepali rice pudding), Himalayan Green Tea, Gajar Halwa (carrot pudding).

Everyone knows that no mountain is ever climbed without a support crew and Moran team members performed those roles brilliantly, we had lots of wheelchair pushers, cheering and clapping on the walk route, flag waving and general encouragement of everyone involved.  Our onsite physiotherapists Sherpa Dhan, Sherpa Vee and Sherpa Ben got everyone warmed up, set mini challenges for individual walkers and recorded the achievements for those who wanted to improve their mobility.

Said Sherpa Dhan – “To say the last few weeks have been amazing is an understatement.  I have witnessed residents and colleagues coming out of their shell.  I have seen individuals push aside their personal struggles and differences to challenge themselves and become fitter.    There have been so many personal successes as a result of this challenge – too many to name them all.  We have a resident who recently suffered from a serious stroke and is unable to walk.  She was determined to participate in the walk by being pushed in her wheelchair, moving her strong ankle every step of the way.  I cannot explain how exciting it was for both myself and her when we realized that she had found movement in her stroke affected ankle as a result of this challenge.”

Said Sherpa Ben – “I challenged resident David to participate in the challenge after seeing him frustrated by his mobility, David has made massive gains and has gone from being barely able to move around his room with assistance to walking 100m almost by himself.”

Said Sherpa Vee – “I challenged resident Barbara to participate as she was battling a severe decline in her physical mobility and we were skeptical about whether she would be able to stand again.  She has been heavily involved in the Reach the Summit Challenge and is now walking more than 200m each day”.

On the 28th July, Moran Sylvania residents and their support crews reached the ‘summit’ of Mount Everest with much jubilation and fanfare.  They were rewarded not just by the personal satisfaction that they had achieved their goals but also by watching a very special video message of congratulations from AHF  Ambassador George Hillary, Grandson of Sir Edmund Hillary who with Tenzing Norgay were the  first climbers to reach the summit Mount Everest in 1958.

Said General Manager – Lorraine Kelly, “I am so proud of us all, our team, our residents and our supporters and partners.  I’d like to say a very special thank you to the team at the Australian Himalayan Foundation for getting excited about our project and for being with us every step of the way.  Your support and enthusiasm and of course the message from George have meant so much to us and really added a special cultural element to our challenge.”