Historically within an aged care home the ‘Dementia Unit’ was a secure unit with little or no interaction between the people in the unit and those outside the secure doors. In many respects this isolation reinforced the stigma, fear and ignorance of the disease through no fault of the person living with dementia.

This pattern is often replicated within the the community. Our own fears and lack of understanding lead us to make decisions about people behaving confused as odd  or ‘stupid’.  This year the team at Moran Roxburgh Park, VIC set out to make a real difference in this area of care and are working closely with Dementia Australia to increase the knowledge that staff, relatives and residents have of those living with Dementia.

As a result of this something special has been taking place in the dedicated Dementia Care wing called Chelsea House. Over the last year the walls of fear  and judgement are slowly being replaced with understanding, empathy and support. Residents living outside of the secure house (Chelsea House) are increasingly regular visitors and residents who reside in Chelsea House are regularly seen attending all the events and activities held throughout the home.

Gerard La Fontaine is one such resident. Gerard, himself is living with a form of Muscular Dystrophy and moved into Moran Roxburgh Park at age 51. He had never encountered anyone with Dementia and as he recalls on his first day someone asked the same question three times in as many minutes,  Gerard wondered what was going on thinking there was something wrong with this person who was behaving so strangely. 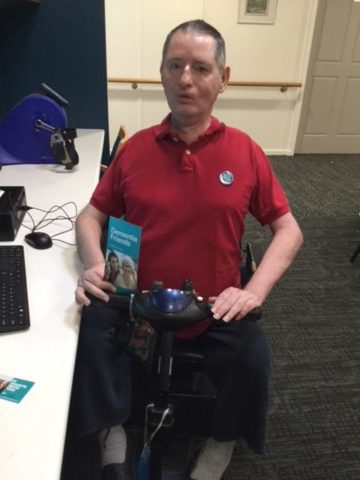 Recently Gerard joined a Dementia Australia training session held for Moran Roxburgh Park staff and completed the online training becoming a Dementia Friend.  On completion of the course he received a certificate and a badge to wear proudly.  With a greater understanding Gerard is now able to support members of our Moran family with what he has learned.

Many of the Moran team are completing the Dementia Friends online course and its wonderful to see our residents like Gerry getting involved too.  The training doesn’t take too long; it is aimed at increasing the knowledge of everyone in our community. It shows us how best to support each other whether they be family, friends or a stranger in need. To learn more go to www.dementiafriendly.org.au