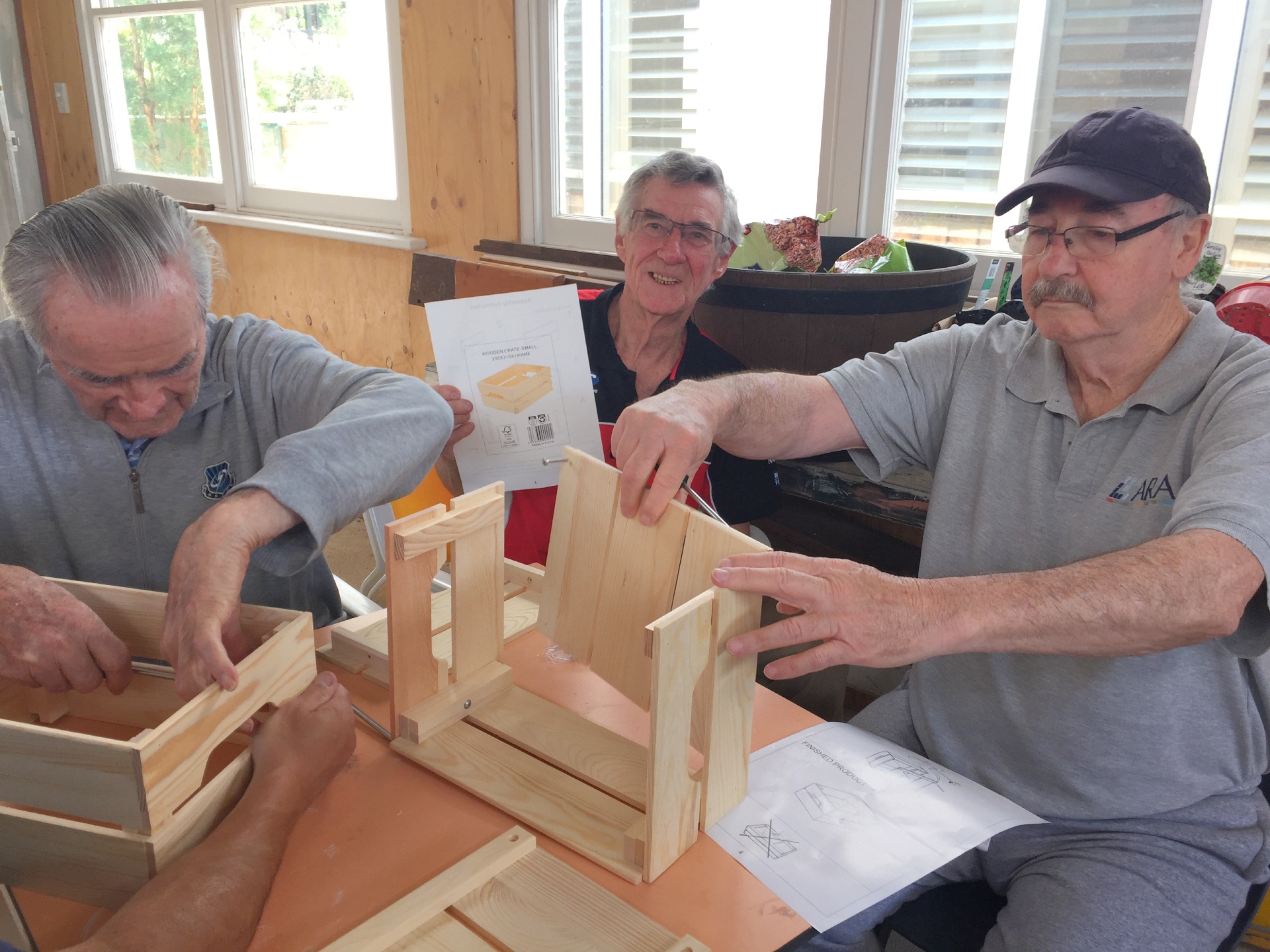 Mateship is an important part of life at Moran Kellyville and whilst many of the lifestyle activities in the home suit everyone, there are some that men particularly love.  Their time in the shed and time spent fixing things is when they are most engaged and most relaxed.  Most of all, they are among mates.

The Men’s Club and Men’s Shed is perfect for ‘Dads’ who had a lifetime of fixing things around the house, running around after their children’s sporting or school commitments and putting their hand to any project needing their attention.  Now in their retirement years, they can focus on doing fun activities that Men’s Shed has to offer.  Their families love seeing what they have been creating and constructing.  There are chickens and gardens that they help tend to, regaling many chicken stories to their families when they come to visit.

One such resident is Alan Bradley who recently moved to Moran Kellyville and who has become a regular at the Men’s Shed.  Alan is 74 years old and was born in Ipswich, Queensland, the eldest of three children.   He left home at 16 to join the Royal Australian Navy as an electronics technician.  After many years in the Navy, Alan decided to plant his feet on dry land, working throughout Australia and in Germany.  Alan worked in electronics in one way or another for over 50 years with companies like Siemens and Phillips.  At one point he was even the poster boy for a company called ‘Allen Bradley’ who used the slogan, “Now you can buy Allen Bradley, from Alan Bradley!”

Alan was an avid golfer, which is how he met his wife.  Both were very successful club golfers and married in the place they first met, Corowa, near the NSW/Victoria border.  Together they had two daughters Susannah and Sarah.

Alan always loved being outdoors and having two daughters meant he was a netball Dad.  So much so, he became President of the Carlingford Netball Club and was later involved in the Hills District Netball Association.  Alan was a member of Carlingford Rotary for many years and is a life member of the North Rocks Athletics Club after many years of service.

Alan started his own business importing and exporting electronic components and fuses, working from the garage of his Carlingford home.  He converted the old quadruple garage into an office, doing all the building and renovations himself, with his helpful daughters by his side!  The business was extremely successful and eventually moved to North Rocks.  After 30 years Alan finally closed its doors in 2020.

In closing the business, Alan’s family have seen a side to him that they haven’t seen in years.  He’s relaxed, laughs and smiles more and is getting involved in new activities.  After dedicating himself to business for so many years, he had stopped being the social butterfly and life of the party that they knew him as.

“Men’s Club and the Men’s Shed at Moran Kellyville have brought back our fun loving Dad and it brings us such happiness,” said daughter Sarah.

Alan was always Mr Fix-it to his daughters and responsible for all the sewing jobs too! Whenever they needed their school uniforms hemmed, they came to Alan.  He’d been taught to sew in the Navy and hadn’t forgotten the skills.

Keeping busy is a big part of residents’ lives at Moran Kellyville, where they are supported to help with day to day tasks if they choose to, like baking or cleaning.

“Dad prides himself on being meticulously clean, something that was instilled in him in the Navy. I’ve noticed that Dad has continued to remain committed to his cleaning, with quite the collection of feather dusters in his room!” said Sarah.

If you’re thinking about respite care or a move to permanent residential aged care, we invite you to come and see the community at Moran Kellyville for yourself.  Please contact our Resident Liaison Team on 9881 4222 for information.